There are 136 outdoor warning sirens in the Dane County system. The sirens are located in the most densely populated areas of the County. As the outdoor component of the warning system, the sirens have a very important role. The sirens are an effective means of alerting people who are outside.

Click on the map to see a larger version of the image. 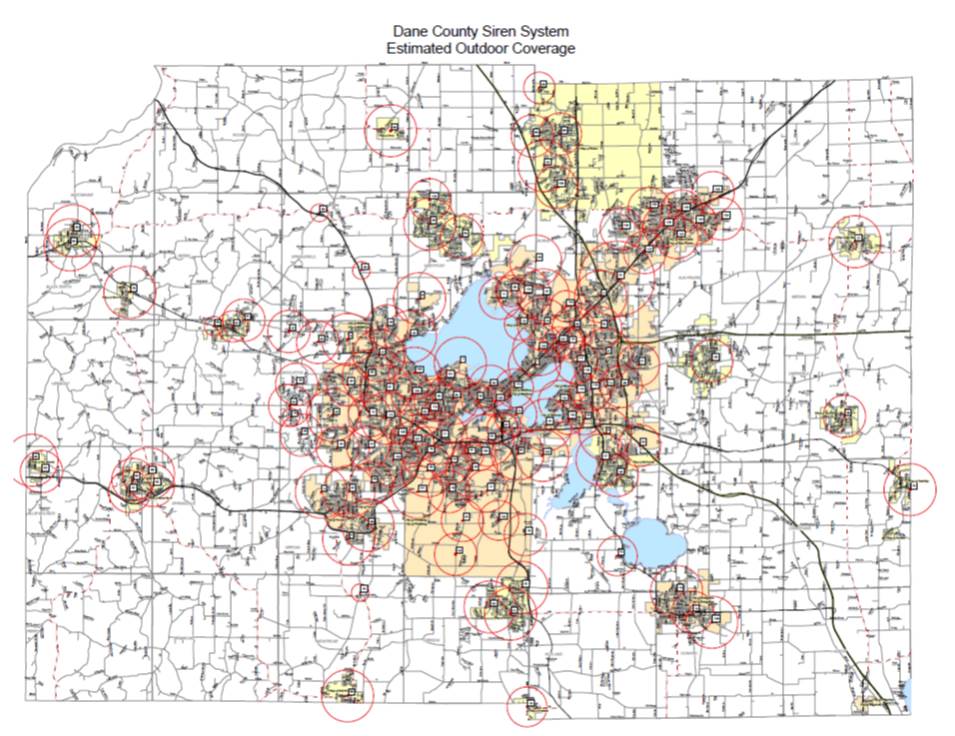 The circles on the map indicated the estimated OUTDOOR effective range of the sirens. The ranges are shown for planning and comparison purposes only. These ranges do not necessarily represent the actual audibility of any given siren.

There are a number of factors that affect the range of the siren. First of these is sound output. Very simply, some sirens are designed to be louder than others. A louder siren will have a greater range.

Atmospheric conditions also affect siren range. Wind speed and direction, air stability, and relative humidity all affect the distance that the sound will travel. Your ability to hear the siren will change as these conditions change. It is very possible that from your location, in some cases you will be able to hear the siren, while in other cases, you won’t.

Even with these limitations, sirens can be a very effective source of warning, if you are outdoors and within range of the siren.

The National Weather Service implemented Storm-Based Warnings in October of 2007. Prior to 2007, the National Weather Service issued and disseminated tornado, severe thunderstorm, and flood hazard warnings using geo-political (typically county) boundaries. Storm-based warnings are based on the threat area of the storm itself, which usually does not recognize county boundaries.

Storm-based warnings are a substantial improvement over the old, county-wide warning method. Storm-based warnings provide more specific information about the location of the severe storm and the direction it is tracking. It also reduces the likelihood of unnecessarily alarming those outside the threat area. Especially in geographically large counties like Dane County, by issuing warnings based on the specifics of the storm, the National Weather Service can substantially reduce the area being warned. Here is a link to a fact sheet with more information on storm-based warnings.

With storm-based siren activation, the only sirens sounded are those with warning coverage in the Tornado Warning area determined by the National Weather Service. This reduces the likelihood of needlessly alerting people that are not at risk, and also provides certainty that you are in the warning area when you hear the sirens.

Below is a radar map view of the storm-based Tornado Warning issued by the National Weather Service on June 18, 2014 at 7:57 AM. 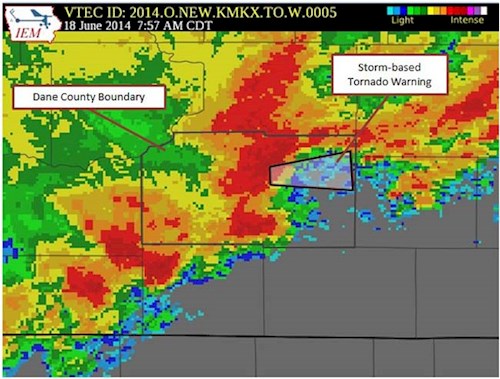 Below is a map showing the sirens selected for activation in the same storm-based Tornado Warning: 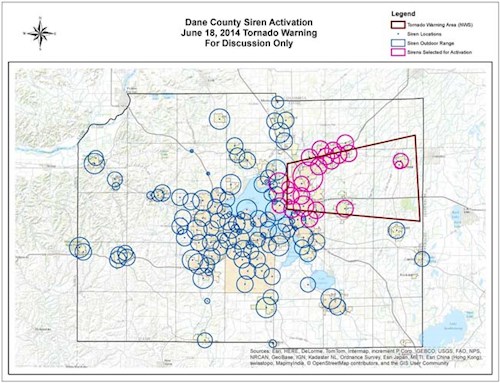 Please contact Dane County Emergency Management if you have a question about the siren system that is not answered here.

Dane County has recently completed the process of replacing and upgrading a number of outdoor sirens across the County. This was part of a significant capital project to replacing aging and obsolete sirens. The new sirens are more reliable, are equipped with battery back-up, and produce a sound that will carry farther than the sirens they are replacing. This is a major improvement to the system that will greatly increase the overall reliability of the system.